When did we stop worshipping women?

“Whoever severs himself from Mother Earth and her flowing sources of life goes into exile.” – Emma Goldman.

At some point in our lengthy past, we didn’t just stop worshipping women in the literal sense, but also in the philosophical sense; the principles of The Feminine were also forsaken. What happened and when?

We now live in a patriarchal world where most women are placed on a spectrum that spans from unconscious discrimination to slavery, where they are seen as weak or inferior to men in some way. Most women think twice before walking down an alleyway or simply past a construction site for fear of harassment or worse, and they can’t even sit alone at a bar without most people thinking they’re looking for a one night stand. The tacky stench of furthering oneself for sexual favors still hangs in the air. When a man sleeps around he’s a “player.” When a woman sleeps around she’s a “whore.” Someone’s wife/daughter/mother/sister treated like an animal. Is this who we are? Is there anything hidden in our ancient genes to explain this superior attitude of males over females?

What about the baby argument, the notion that a woman’s purpose is merely to give birth to and raise children, whereas the male’s purpose is purely to provide for them? When the first humans stood upright on their hind legs they developed narrower hips, and this caused females to give birth earlier than the animals they previously were; human babies cannot walk from birth whereas most other newborn animals can. This tied new human mothers to nurturing a newborn, but there is no convincing evidence to say that this tied her to a male to provide for her. Other females could’ve provided for her, and even if not, she would’ve had basic foraging skills that required minimal exertion, even when pregnant or with a newborn on her back, such as picking berries and trapping rabbits. So our contemporary perception of females being helpless and dependent on males is an aberration of relatively modern times (humans have been around for 2.5 million years!)

Don’t compare modern humans’ relatively softer lifestyle and limited skill set with our ancient ancestors; as a society they may have been less technologically advanced but as individuals they left us for dust. Foraging tribes would’ve moved quickly and stealthily, their senses as tuned to the environment as the other animals they competed with, each tribe member a capable and sturdy individual, including females. If even the toughest contemporary male went back in time only 70,000 years and stumbled into the wrong part of the forest, a forager female could open his throat with a flint knife before he realized he wasn’t alone. And she’d have fashioned that knife from bare rock just a few minutes earlier.

Nothing in our extremely ancient past answers our question about when we stopped worshipping women, so let’s fast forward in time for answers, to the dawn of civilization, in ancient Egypt.

The Egyptian religion was matriarchal, headed by “Nut” (pronounced “newt”) as goddess of the cosmos and sky. On the ceilings of preserved ancient Egyptian temples you will see paintings of The Sky Goddess, Nut, swallowing the sun in the west and giving birth to the sun in the east, and passing through her at night.

For at least 95% of human existence we saw a goddess as the primary redeemer, so we have to fast forward in time for answers; to ancient Greece, and the story of Pandora’s Box. Of course, goddesses played a prominent part of Greek mythology, but here is where the seeds of patriarchy were planted. Pandora, the first human woman, was portrayed as too weak to resist temptation, and by opening the box she unleashed all that was bad in the world. The moral of Homer’s famous story in The Iliad was misconstrued at some point; it wasn’t Helen of Troy’s beautiful face that launched a thousand warships, it was the ego of a jealous and spiteful king who sent thousands of men to their death all because he treated his wife like a piece of meat and didn’t care for the consequences or to admit being wrong. Women were slowly being vilified at this pivotal point in history.

Just as a couple who aren’t conscious of their relationship slowly drift apart, one unnoticeable degree at a time, so too did humanity drift away from worshipping women.

As the baton of civilization was passed from Egypt to Greece, a key message of ancient wisdom was lost: that The Feminine and The Masculine must be kept in balance- the core principle of matriarchy, as opposed to patriarchy where males are above females. I explain this lost “key message” of balance and how it was encoded in what is probably the oldest “fairy tale” in my #1 bestselling book, The You Code, on Amazon. But that’s just the backstory; in this book you’ll reveal who YOU are at the same time as revealing who WE are.

About the Author: James Sheridan 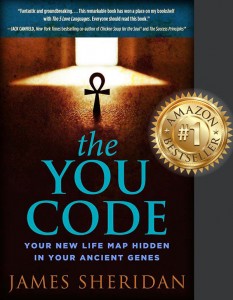